I recently made secret agent treats to deliver along with the invitations to our upcoming "Top Secret" grandma camp. Papa dressed up as a Senior Secret Agent to notify all of our grands that our sources had identified them as top recruits for our upcoming Secret Agent Training Camp.

As a last minute idea I threw together some secret agent treats and the activity that went along with them. After creating all of my little bombs, placing the fuses, plating, and adding my "secret agent fluff" it was time to go. 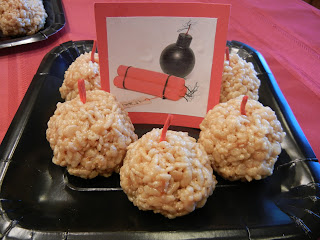 The little bombs turned out really tasty but I was like a mad scientist in the lab creating them. I wanted to make them using a recipe that I have for Peanut Butter Crunchies but I had ran out of corn syrup. I decided to use mini marshmallows for my corn syrup. Not knowing how the difference in the ingredients and the measurements would react I was risking the whole batch of explosives.
After I was done cookin' up the bombs I put the lid on the sticky pot of leftovers and I saved it to clean up later. I didn't get back to the pot until the next morning. I have to tell you that bomb goo can really set up on a pan! I decided to fill the pan with a good amount of water, cover it, and allow it to come to a boil to help loosen the hardened goo.
I walked out of the kitchen to allow it to do it's thing...... then I forgot about it! I went clear to the other end of the house and got busy working on other top secret stuff. When I smelled something burning I remembered the pot of water on the stove. When I stepped into the hall it was filled with smoke. I'm sure I only had seconds before the smoke alarms would have gone off.  I hurried to the kitchen to see what I had done. 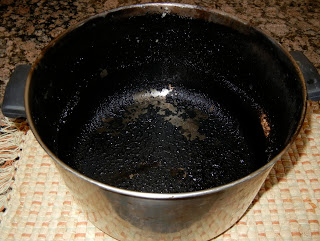 There was smoke billowing out of the pot. I was afraid the bottom of the pot had melted out. I wasn't sure what to do. This bomb making stuff had become highly explosive! I turned off the heat, and opened all of the windows. I was afraid the neighbors were going to see the smoke seeping out of my windows and call the fire department. Oh, the smell. What had I done to my home? 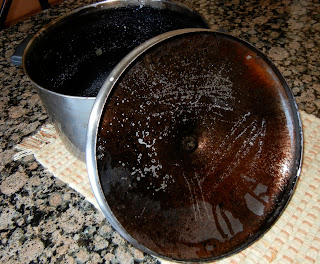 I turned on all ceiling fans, exhaust fans, and put a can of Fabreze to the test. I'm pretty sure there had been a full blown fire in the pot! To make things even worse I had added a few more bomb making tools in the pot to help loosen the goo off of those too. 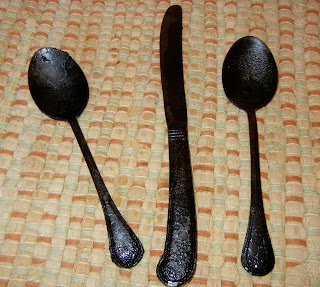 I was hoping to have cleared the smell out of the house before hubby came home from work. I thought it was so much better but I think I had only absorbed the smell too! The first thing he said when he walked in the door was; "What is that awful smell?"
I was prepared with some good news and bad news for him. He has been after me for quite some time to buy myself a new set of pots and pans. So, I said I burned up my favorite pot today BUT, the good news is that it might be a good time to buy a new set of pots and pans.
Any tips on how to clean up such a badly burned pot?  For now, it is still soaking.
Posted by Grandma Shelley at 8:59 AM