Grandma's house had been transformed into a top secret training camp for her campers. All of the decorations were in place and the day had finally arrived for the kids. It is after all a full year between grandma camps!
We had a new potty trained cousin added this year bringing our number to nine campers. The kids corrected me often when I called them campers because they were "secret agents" this year!

The minute the kids entered the door to this year's Top Secret Grandma Camp the "make believe" began. Papa and I were prepared to make it the best camp ever. 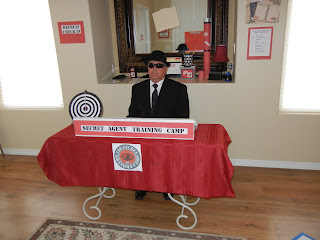 When the recruits entered they were greeted by Papa dressed as the senior secret agent. The same exact way he looked when he had hand delivered their top secret invitations a few weeks before.
Papa called them up to his desk by their secret agent numbers. He asked each one for their top secret documents and he asked them to whisper the secret code required for entry into his ear. The secret code had been included in the invite. The secret code was "Tick, Tick, Tick". 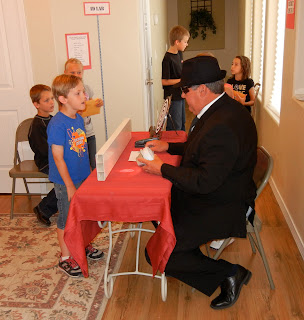 Papa then required them to have a security scan. 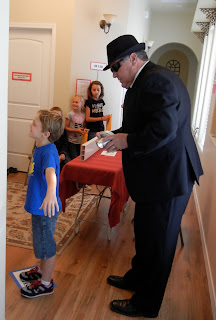 They all watched and listened as their cousins were scanned. The scanner was made from a headlamp that we had with a smoke alarm taped to it with black electrical tape. This was Papa's idea and one that the kids loved.  The flashlight scanned their bodies and Papa was able to use the button on the smoke detector to sound an alarm. Three of the nine cousins had to step to the side and be scanned again later for security clearance.
Once they cleared the security scan they were each given a clipboard with a file, a pencil,  a personal profile page, a check in requirement sheet to be checked off, and a manila file jacket with their agent number on it.
Once they had their clipboards they were to report to the ID lab. 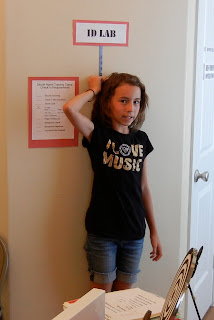 In the ID lab we took height measurements, weight, eye color, hair color, and we made notes of any scars, tattoos, or birthmarks for their personal profile pages.
Now our nine secret agents were ready to move on to background checks, fingerprinting, DNA testing, and the top secret file department..... to be continued.
Posted by Grandma Shelley at 10:58 PM